Lameness is the third most common health problem and for involuntary culling in the Canadian dairy industry, after reproductive performance and mastitis. This disorder is a sign of pain resulting in locomotion, gait or posture. Beside this welfare impact, it has a major economic impact, including treatment costs and reduced milk production, reproductive performance, and cow longevity. Current scientific knowledge has not been effective in of prevention strategies as the average lameness prevalence in Alberta is still 20%. The Canadian Dairy Code of Practice aims to have 10% lameness as a maximum. Two students will present the focus of their projects to mitigate lameness. END_OF_DOCUMENT_TOKEN_TO_BE_REPLACED Commercial livestock systems, regardless of the species, are typically geared towards promoting good health and production of the animals. Other factors that might be important to the animals, such as to perform natural behaviours, do not necessarily take precedence. The Animal Welfare Team at AgResearch in New Zealand has been exploring how we can shift on-farm practices to be more focused around animals’ natural behaviours. These management shifts are often informed by the animals’ preferences and may be quite simple.

END_OF_DOCUMENT_TOKEN_TO_BE_REPLACED

Incidence and Characterization of Feedlot Lambs and Ewe Flock Lameness Sheep production in Canada is increasing (one million head on 11,000 farms of which 2,000 farms are in Alberta), due to the growing demand for lamb meat by consumers over the last five years as a result of growing ethnic markets. Consequently, both ewe flocks and growing/finishing lamb feedlots have been increasing in number and size within Alberta to meet the demand for this growing market.
Lameness is a common cause of welfare and economic concern in most sheep producing countries. For example, of lameness in UK sheep farms has been reported to be between eight and 10 with the main cause being, interdigital dermatitis, severe footrot, ovine digital dermatitis, and shelly hoof (Kaler and Green 2009*). In Alberta, we see lame sheep on farms, feedlots, auctions and pasture. At one time, there was a provincial footrot eradication program. Veterinary inspections, foot trimming and foot-soaking were standard annual procedures for the 20,000 plus sheep that headed to B.C. forestry reserves. Despite all the effort, time and money, lame sheep are still common. END_OF_DOCUMENT_TOKEN_TO_BE_REPLACED

It’s Time to Talk about Antimicrobials In 2014, the World Health Organization (WHO) recognized the increased development of antimicrobial resistance (AMR) as a global crisis. Dr Keiji Fukuda, Assistant Director-General of WHO stated, “Without urgent, coordinated action by many stakeholders, the world is headed for a post-antibiotic era, in which common infections and minor injuries which have been treatable for decades can once again kill.” This will affect generations to come. Later that year, our federal Minister of Health demanded that an action plan be developed by Health Canada to address this issue in Canada. END_OF_DOCUMENT_TOKEN_TO_BE_REPLACED 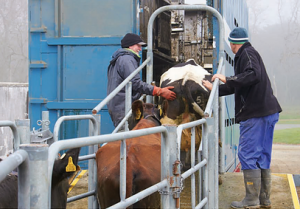 On-farm emergency slaughter (OFES) is one end-of-life option for farm animals that cannot be transported humanely but are fit for human consumption. OFES – whereby veterinary inspection, stunning (using a firearm) and bleeding occur on the farm before the carcass is transported to a slaughterhouse for processing – is allowed in several Canadian provinces including Alberta. The stated goals of most OFES programs are to prevent undue suffering of an injured animal and to salvage . END_OF_DOCUMENT_TOKEN_TO_BE_REPLACED