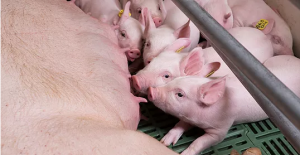 Confinement of breeding sows is one of the most controversial issues in livestock production (1). In the United States, the majority (~70%) of sows are housed in confinement facilities (1,2). The most common housing system for pregnant sows gestation stalls (2,3). Gestation stalls were developed in the 1960s and gained popularity because they allow for better management and observation of sows with respect to nutrition, health, and disease compared to extensive systems (e.g. pens). As well, from an economic point of view, gestation stalls maximize the number of pigs weaned per year per sow most cost-effectively (3,6). However, from a welfare standpoint, gestation stalls restrict sows’ opportunity to exercise, socially interact, and interact with the environment (1). Most commercial stalls in the UK and US are designed around static space requirements, thus only provide the minimum space required for averagely sized sows and are all similar in design and measurements (58 x 213cm; 2,4). Designs did not take into consideration the amount of space required by sows to stand up, lay down, or turn around (4).

Sows increase in size as parity and stage of gestation progress (2,4). Consequently, freedom of movement becomes more restricted as body length and width increases. A study done by McGlone et al. (2004) found that 95% of sows would need a stall with a width of 71.6 cm or greater to be fully contained within stalls. This means that common gestation stalls are not wide enough to allow sows to be contained within the width of the stall while laying down. Fewer than 40% of sows in conventional gestation stalls are contained without some body parts (legs, tail, etc.) protruding outside the bars or being compressed (2). Additionally, restriction of movement can cause biomechanical stress on sows and may contribute to incidence of lameness in confined sows (1,4).

Long term confinement of sows during gestation restricts the of exercise sows have and results in a decrease in the amount of muscular tissue, which makes standing up and lying down difficult (4). Difficulty in carrying out these movements indicates poor welfare of sows and can affect the welfare of the piglets as well. Transitioning from farrowing to gestation stalls involves feed restriction of gestating sows; restricting what sows eat often leaves them hungry for most of the day. Hunger makes sows restless and they often exhibit seemingly aberrant behaviours (such as bar biting) towards objects in their environment, known as (1,5). Stereotypies are observed more often in sows housed in stalls than sows housed in pens (5). Contributing factors also include lack of environmental complexity, lack of enrichment (rooting/chewing material), and the inability of sows to exert control over their environment (5).