Castration of Cattle and Pigs

Castration of Cattle and Pigs 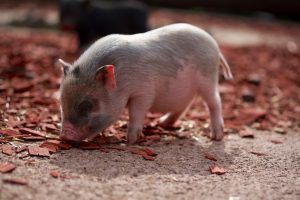 Castration is a common practice in modern Canadian agriculture and around the world. Castration involves the removal or destruction of the testicles in male animals (1,2).  Castration is divided into 3 major groups: physical, chemical and hormonal, with physical being most common (3). Methods of castration include surgical removal (knife), burdizzo (clamp used for physical crushing of testicular cord), elastrator/banding (damage scrotal and testicular blood supply) and immunocastration (immunization against gonadotropin-releasing hormone; 1,2). In cattle, the testicles hang outside of the body in the scrotal sac, whereas in pigs, the testicles are located within the body (2). Due to these anatomical differences, castration of pigs is mainly performed using the surgical method (2). In Canada, immunocastration is only permitted for use in pigs for slaughter, not in cattle and other livestock, as an alternative to surgical castration (2).

Pain associated with aversive procedures, including castration, is an increasingly important animal welfare concern, especially as consumers become more concerned with food animals being treated humanely and living a “good life” (7). All methods of castration cause pain and distress. The method and age at which castration is performed, however, may impact the intensity and duration of pain (2). Surgical castration causes intense pain for a few days, whereas banding causes less intense, chronic pain for up to a month (5).

Complications may arise from castration, including infection, bleeding, swelling, discomfort, and pain (1,4,6). These complications, as well as pain, can be minimized by castrating at an early age, using proper techniques (1,4). Pain mitigation (anesthetics or analgesics) can also be used with guidance from a veterinarian (4). An anesthetic is a drug that temporarily eliminates all feeling. Local anesthetic can be used before castration to cause numbness and provide several hours of pain relief (1). Analgesics temporarily eliminate pain but don’t last long enough to eliminate all pain associated with band castration (1).

Castration is important for cattle because cattle are generally slaughtered after the onset and progression of puberty, and intact males are less feasible to rear from a human safety perspective (2). Castration at a young age (less than 8 weeks old) is preferred as it results in improved animal welfare and improved animal health and gain (1,5). The younger the calf, the lower the stress response with regard to cortisol levels and behavioural response (2).

The Code of Practice for the Care and Handling of Beef Cattle requires competent personnel to perform castration using clean, well-maintained equipment and acceptable methods (4). Improper castration is unacceptable and can lead to “belly bulls” where one or both testicles are mistakenly pushed into body cavity from the band during castration (1,4). Consequently, these animals will still exhibit bull-like characteristics and will require a more painful, invasive surgery at an older age. Effective January 1, 2016, producers must use pain control, in consultation with their veterinarian, when castrating bulls older than 9 months of age (4). This will change to bulls older than 6 months of age starting January 1, 2018 (4).

Essentially all male pigs are castrated before weaning, except selected breeder boars. The two main reasons for this are behaviour and meat quality (2). As age and body size increase, intact boars tend to be more aggressive with other pigs and more difficult to handle than castrated pigs (2). Castration is most important for pigs with regards to meat quality as pigs are generally slaughtered around the onset of puberty (~6 months of age; 2). The meat from intact boars is known to develop “boar taint” which has an unpleasant odour and flavour due to the presence of androstenone and skatole (2).

Producers aim to strike a balance between animal welfare and the need to efficiently produce quality pork. The Code of Practice for the Care and Handling of Pigs requires the use of anesthetic and analgesic to control pain when castration is performed after 10 days of age (6). Additionally, castration at any age must be done using analgesics to minimize post-procedure pain. Immunocastration is a more humane method of castration compared to surgical castration, as there is little to no pain associated with the procedure (2 injections in the neck, at least 4 weeks apart before slaughter; 2).

In conclusion, castration is a common practice in the Canadian cattle and swine industries because it decreases aggression, prevents unwanted breeding, and improves meat quality. Although all methods of castration are painful, pain can be minimized by castrating at the youngest age practically possible. Minimizing pain (e.g. pain mitigation) can improve animal welfare during aversive procedures such as castration. Moving forward, research should focus on improving immunocastration in cattle as an alternative to surgical and non- surgical castration. This will allow the products used to be licensed for use in Canada.