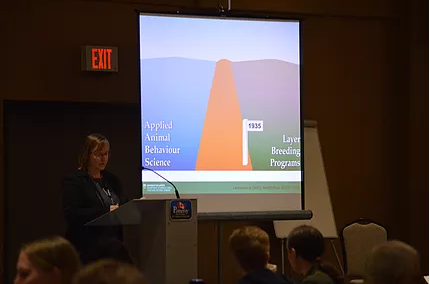 She explained how one of the biggest shifts since the 1930s has been a move away from curiosity-based research to traditional scientific research covering a multitude of welfare areas.

With battery cages and automation on the rise since the early- to-mid-60s, the next 15 years saw a shift into investigating the birds’ mental health and stressors such as suffering and frustration.

Recent developments to increased poultry welfare since 2015 now include the “5 domains” which includes: Environment, Behaviour, Mental state, Nutrition and Health.

New advances in poultry research is now allowing Dr. Bench to apply model markers on the birds and creating a 3-D tracking image, which lets her track the animal’s movements and study them in ways like never before. This research is valuable to know how the bird’s movements may be affected by various housing situations, body stressors and diet.