Finding Ways to Ask Cows How They Feel

Finding Ways to Ask Cows How They Feel 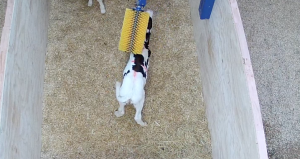 As the public becomes more knowledgeable and more aware of food production practices, the need to provide assurances about the quality of life of our farm animals is growing in importance. This is, however, easier said than done given that many of the people not involved in agriculture rarely ask about how much milk a cow is producing but rather focus their questions on whether she is ‘happy’. As a behaviour scientist working in the Animal Welfare Team at AgResearch in New Zealand, I have been given the mandate to look for ways to ask cows how they feel – in I am trying to find ways to determine their emotional response. My work is supported by DairyNZ Ltd., an industry organization representing New Zealand’s dairy farmers. The industry recognizes that a good life for cows is not simply about the absence of negative experiences, but also the provision for positive ones. 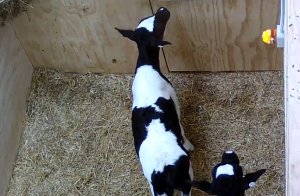 This recognition poses a new question to scientists working with farm animals: namely – how do we measure how a cow is feeling? we can’t just simply ask her! Fortunately, there are a number of well-established scientific methods to approach this. Although the cow can’t tell us how she is feeling we can ask her to show us.

Evaluating anticipatory behaviour is a common method that has been used to help us understand the emotions of an animal. This is done by initially training an animal that, after a specific signal, will be given a reward. Then, by varying the time in between the signal and the reward, the animal will display certain behaviours while it waits – we refer to these as anticipatory behaviours. People that own a dog who loves to go for walks will see this every day! Think about how your dog reacts when you pick up the leash. Does your dog get excited as it anticipates the walk? What does the dog do if the phone rings and you take longer than normal to go for a walk or if your plans change all of a sudden and you put

the leash back in the drawer? You are observing anticipatory behaviour! 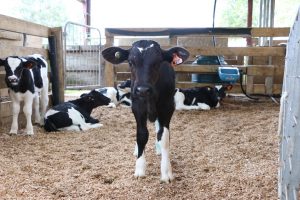 ​Once an animal learns to associate a signal with receiving a reward can measure the animal’s anticipation in the period between the signal and the reward, and then how this behaviour changes if the time between the signal and the reward is shorter or longer. If the reward is very important, we expect animals that show greater anticipation to be feeling more positive. This technique is well established in dogs and laboratory rodents, but until recently it has not been used in cattle.

In my work in New Zealand, I am using a similar experimental procedure to ask questions about how young dairy calves feel. I was fortunate to have Heather Neave, a Ph.D. student from my own alma , the University of British Columbia’s Animal Welfare Program, come and work with me for 6 months. Heather taught two groups of calves that after a signal, in this a flashing light, they would soon get access to either more space or more space enriched with a brush and a hanging rope. We then increased the time between the flashing light and when the calves received access to the reward.

The first step of our analysis has been to identify any anticipation. We have identified one very promising behaviour where the calves shift their attention rapidly back and forth between the flashing light and the exit door leading to the extra space. What we are now looking at is to see if the calves that received the enriched space as their reward showed more of this anticipatory behaviour than the calves that were only given access to more space.

The exciting thing about research like this is that it often has multiple outcomes. While our goal was to indirectly assess animal emotion, the results also showed that calves interacted a lot with a rope and brushes in the enriched space; this is important information in itself, as it tells us that calves housed in standard housing would appear to benefit from some sort of enrichment.

Dr. Zobel studied animal welfare in the Animal Welfare Program at the University of British Columbia, conducting research in feeding behaviour in feedlot cattle, of dairy cattle around dry-off, and management of dairy goats. She is actively involved in both dairy cow and dairy goat research projects in New Zealand. The research program consists of a mix of work that can be immediately beneficial to producers and their animals, and more blue sky research questions that are anticipated to be found useful by industry in the future.

Dedicated, with love, to Banana the cat