Seeking a “Social Pig” in Canada to Improve Welfare

Seeking a “Social Pig” in Canada to Improve Welfare 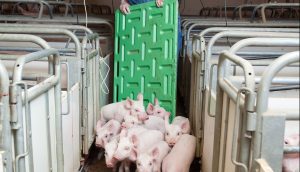 ​As we face the increasing size of the human population, it is projected that meat consumption will increase as well. At the same time, consumers are more aware and have increased their interest in traits related to animal welfare and health. By far, most pigs are finishers, kept in groups from 10 to, possibly, 400 or more. In these social skills of animals help to reduce stress. Too often we only observe from the negative side: traits like tail biting, aggressive behaviours resulting from stress, aggressive social interactions with other pigs and with humans traits have the potential to change the efficiency of pork production in the future, while at the same time improving welfare and reducing medication. Therefore, they are becoming economically important traits in breeding programs. 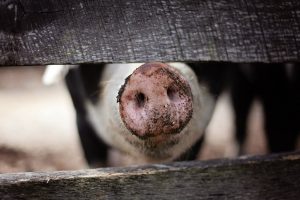 Pigs are social animals and they like to socialize and interact among themselves and with humans. They are frequently kept in larger groups, resulting in greater social interactions between individuals interactions between pigs can be approached from heritable traits which are commonly as indirect genetic effects (IGE). This means that a pig can influence the trait value of a pen mate genetically, therefore offering the possibility to include in the breeding programs and select pigs with better performance. Research has shown that pigs with better performance and product quality are also more social animals. Therefore, selection social qualities may result in improved product quality.

Initial efforts in understanding pig behaviour started in 2009 at Wageningen University, Netherlands, with the project ‘Seeking Sociable Swine.’ The goal of this project was to improve social interactions among pigs by including social genetic effects in the breeding program and to explore the implications of this new method of selection for pig behaviour and well-being. The preliminary results of the project indicated the need to further investigate the genetics and physiology underlying such . 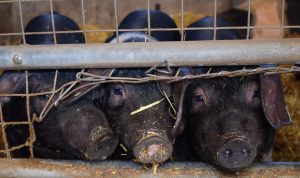 Keeping pigs in groups allows the animals to socialize and interact often, even with proper housing and management, these interactions are associated with negative behaviour such as tail biting, which is a major welfare problem for “victim” pigs and is also an indication of decreased welfare in the pigs performing it since this often indicates that there is something wrong with the system. Tail bitten pigs often have health problems and may have abscesses at slaughter with subsequent carcass condemnation. In addition to poor health, tail-bitten pigs can lose their appetite or eat less to avoid exposing their tail to further biting. Energy is used for fighting disease and not growth. Therefore, being able to select “social pigs” will largely help improve animal welfare, pig productivity and profitability by increasing consumer acceptance and satisfaction. In addition, economic losses due to carcass condemnation will be reduced. 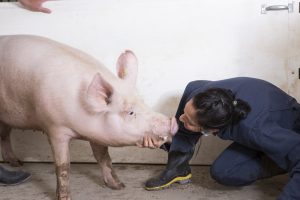 ​It is important to investigate and understand the biology and physiology of . The major focus of our research at the University of Alberta will be to discover new markers/indicators for selecting social pigs by combining genomic and metabolic approaches. We are trying to understand the physiological basis of aggressive behaviour and its relationship with the newly important traits related to welfare in pigs. To address this issue we will measure behavioural traits in selected pigs for 6 months from birth to slaughter. In addition, blood samples will be collected at the same time during phenotyping. In this process, our partner Topigs Norsvin will provide the data (phenotypes, genotypes, and blood samples).

The next step will be metabolomics analyses which will be performed here at the University of Alberta. The advantage of this approach is that it offers the possibility to analyze over 100 metabolites for each animal. This approach will help to map biological processes associated with different behavioural traits such as tail biting, aggressiveness and social interaction. The next step, if successful, will be the identification of genetic and metabolomic markers that will be used to develop test kits. These kits will especially benefit the industry partner in their effort to develop innovative approaches to identify and select social animals for modern pork production.

Dr. Elda Dervishi finished her studies at the University of Zaragoza, Spain. In 2011 she joined the University of Alberta as a postdoctoral fellow working on biomarkers of disease in dairy cows also worked for over a year at Alberta Pig Company. Her research aims to discover genomic and metabolic biomarkers of aggressive behaviour such as tail biting in pigs. This research is supported by funding from the Alberta Livestock and Meat Agency (ALMA). Dr. Dervishi is supported by a Mitacs Accelerate award with Topigs Norsvin.