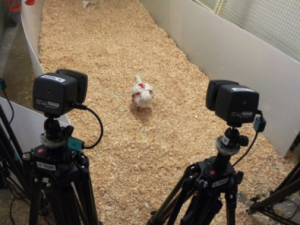 ​Through genetic selection, the modern day broiler has undergone improvements in appetite, its ability to efficiently gain weight, and in its survivability. However, the resulting rapid growth in commercial broiler strains may also broiler gait. Broiler during a gait assessment trial wearing reflective markers for kinematic evaluation Current gait assessment methods can be subjective as they rely on observers to determine the quality of a broiler’s gait using a short multi-point scale. This often results in subtle lameness being missed as most assessment methods were designed to only give an indication of either no problem or whether there is a severe gait concern. Therefore, there is for more objective means of assessing subtle differences in broiler gait. At the University of Alberta, applied ethologist, Dr. Clover Bench, and her are working on a new way to and evaluate broiler gait using 3D kinematic motion capture technology. The results of this research will provide broiler genetics companies with a new means of assessing gait which could be included as part of selection programs. 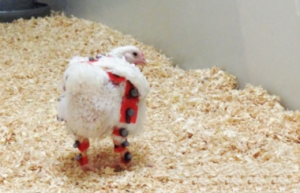 Dr. Bench’s research program specializes in fine movements in an animal’s behaviour which cannot be detected without the aid of a digital medium. Her goal is to develop more objective and automated ways of evaluating animal behaviour and welfare states using technology platforms like 3D kinematics and infrared thermography. These sensitive technologies enable more precise measurements compared with current visual-based methods, allowing researchers to better understand the biomechanics of an animal’s movements and to better evaluate welfare phenotypes.

Currently, this broiler gait assessment research is in its but has already reached some significant milestones including the recent successful construction of a 3D kinematic model which was built by Sarah Nowicki, a recent graduate and member of Dr. Bench’s lab. “It’s one thing to read about the technology, but it is entirely different to actually watch the broilers in the system and see how accurately slight movements can be measured,” says Nowicki. Broiler during a gait assessment trial with kinematic cameras that record the subtle movements of reflective markers. 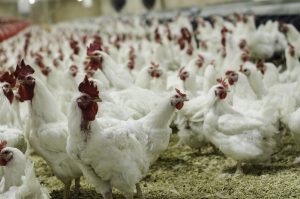 In order to build the model, broilers were taught to walk down a runway wearing reflective markers attached to important skeletal landmarks and joints associated with the legs, hips and back. Then, special kinematic cameras were used to digitally record the movements of each reflective marker as part of a 3D model of the broiler skeleton. Each model is built using several different time points in order to capture gait changes throughout broiler development.

In an upcoming trial, the gait of different strains of broilers will be recorded and assessed using the new kinematic method developed by Dr. Bench’s research group. In collaboration with the University of Alberta’s Dr. Graham Plastow (CEO for Livestock Gentec), gait types identified will then be compared to genomic test results in order to determine whether specific genomic markers are responsible for variations in gait phenotypes.

This research is funded by Alberta Agriculture and Forestry’s Strategic Research and Development Grant Program.