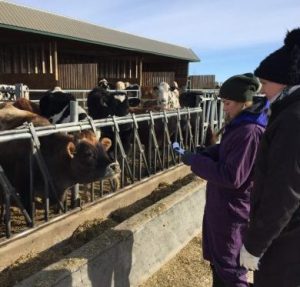 Lameness is the third most common health problem and for involuntary culling in the Canadian dairy industry, after reproductive performance and mastitis. This disorder is a sign of pain resulting in locomotion, gait or posture. Beside this welfare impact, it has a major economic impact, including treatment costs and reduced milk production, reproductive performance, and cow longevity. Current scientific knowledge has not been effective in of prevention strategies as the average lameness prevalence in Alberta is still 20%. The Canadian Dairy Code of Practice aims to have 10% lameness as a maximum. Two students will present the focus of their projects to mitigate lameness.

My name is Makaela Douglas, and I am an undergraduate student studying biomedical sciences at the University of Calgary. It is my passion to work with animals and pursue a career in animal health. This past summer I had the opportunity to work alongside Michelle van Huyssteen on her thesis project for her master’s degree in veterinary medical sciences. As an extension of Michelle’s research, the aim of my project was to assess barriers that prevent producers from making changes on their farms to reduce lameness.

Common barriers producers are faced with when implementing farm-specific changes to target lameness is cost, often involving more time, and . Hoof trimmers are professional individuals that see multiple herds regularly for scheduled trimming sessions. They maintain hoof health through frequent and corrective hoof trimming, and thus improving locomotion and reducing lameness caused by infectious and non-infectious hoof lesions. By gaging producers’ opinions on their hoof trimmers through producer questionnaires and surveys, we can explore how well hoof trimmers promote lameness control and whether they provide useful suggestions to reduce the problem.

During each farm visit, producers completed a questionnaire and Western Canadian Certified Hoof Trimming Association () Survey. The questionnaire focused on producer knowledge on lameness, treatment costs, and management changes to control lameness in their herd. The surveys used multiple-choice questions to analyze producers’ opinions on trimmer certification and the trimming sessions.
Graduate student Michelle van Huyssteen’ focus is mainly on understanding the producers’ perspective and how this impacts lameness prevalence on . A lameness risk assessment (RA) was also completed during each farm visit to evaluate farm-specific risks that contribute to lameness, such as facility design and management practices. Lameness prevalence of each farm was determined by locomotion scoring the lactating herd as they exit the milking . Each cow was filmed while walking on a flat and even surface, where cows with a locomotion score of 1-2 are non-lame, and cows scored 3-5 are lame. 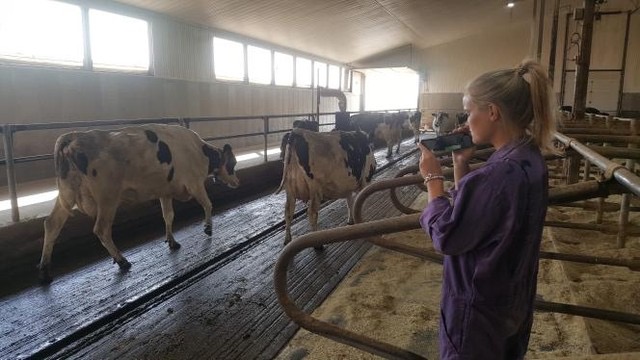 Overall, 28 farms had a lameness prevalence of greater than 10%, and 14 of those farms had a lameness prevalence of over 20%. When studying the relationship between lameness prevalence and the current level of understanding of the general facts on lameness, many producers answered “High” on their knowledge of lameness, however, the average lameness prevalence for those individuals was still 18%. On the WCCHTA surveys, producers indicated that hoof trimmers were a main source of information for hoof health and lameness. Expectations of hoof trimmer visits were to reduce the number of lame cows, increase milk production and improve overall cow health. Interestingly, not all trimmers discuss the results of the trimming sessions, missing an opportunity to tackle lameness.

Hoof trimmers play an important role in raising awareness of lameness in dairy cattle and can provide useful information that producers can use to mitigate the issue on their farm. Therefore, discussion of hoof trimming records between the hoof trimmer and their clients should be a major focus during the trimming session. Also, veterinarians can use data available on to set priorities for health and discuss lameness intervention strategies.

Michelle will be continuing the project by evaluating the RA using herd lameness prevalence estimates and hoof lesion records to determine if it accurately identifies risk for lameness on . In addition, she will conduct structured in-depth interviews with producers to understand the impact of the RA result and identify barriers that prohibit management and facility design changes directed at lameness reduction. It is our ultimate goal to better support the dairy when tackling lameness on level.

This project is funded through the Industry and Market Development program of Alberta Agricultural and Forestry.