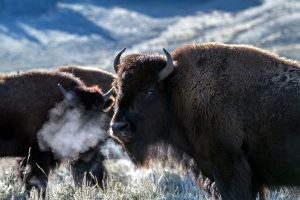 Bison handlers know how quick and flighty bison can be when confined or stressed. They appear to have no respect for their bodies. We as their keepers must eliminate areas and conditions that place them at risk.

In the it wasn’t uncommon to a bison from a broken neck or to have several injure themselves while they were being handled. As bison we have improved our practices significantly but there is still room for improvement. We must proactive as an industry. My goal in this article is to provide some suggestions for everyone handling bison as well as share some scenarios.

There has not been much research done on handling bison. Much of the information is anecdotal and based on the experience of those in the bison industry. by people such as Temple Grandin and her graduate students have started to investigate bison handling issues. Manufacturers of bison handling equipment have developed equipment incorporating feedback from producers to minimize animal injuries while protecting the handlers. We as producers should always look for ways to improve our handling techniques.

As a I use several measuring sticks to measure my success at handling bison. Minor injuries such as bloody noses or a broken horn are mentally noted – their frequency and where they have occurred. You can also monitor the percent of bison that fall and the that hit fences and gates including the location. There could be several very different causes from the obvious ones such as handling setup, experience of the workers, flightiness of the bison to less obvious such as weather (overcast versus sunny), time of day (are shadows being cast), time of year (rut versus non breeding season), wind causing a tarp to flap, or delays in handling that allow bison to get agitated. Serious injuries such as broken necks, broken noses, leg injuries or bison getting caught by horns or legs should have their cause researched and processes developed so these injuries are not repeated. Learn from our mistakes. Solutions to some of these injuries range from tarping gates for slowing bison down to making handling facilities taller so jumping is not even attempted. 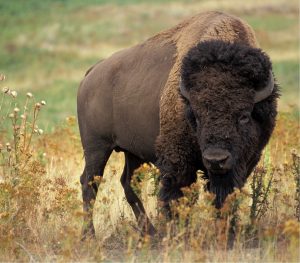 Handling facilities need to be around seven feet tall to prevent bison from jumping. Placing roofs over chutes or handling boxes also tends to slow bison down and keep them calmer. Trying to jump over panels can trap legs with legs slipping between the panel and post. Guards placed over the top of these areas prevent that from occurring.

Bison are flight animals and their flight zone is much, much larger than that of cattle. Most times slower movement with only slight body language will get the job done. Most handling areas are pretty much enclosed. If areas are too closed in, bison may try to hide in those areas. One solid side with the other partially open so bison can partially see the handler will facilitate movement. Stay a distance away so they don’t become agitated.

When processing bison I like to use various forms of handling aids. First is simply moving towards them. Minimal body language will often work. If increasing pressure is required I will first use waving devices or flags and as necessary followed by paddles that rattle. The final aid may be a stock prod but only if ABSOLUTELY necessary! Often a few seconds delay between these handling methods is all that is necessary for the bison to proceed on their own. we keep the stock prod away from the working area and use it only when absolutely necessary and only as a last resort. I have seen systems where 300 bison were processed and the prod was used only a couple of time. Should a prod be necessary, generally one quick touch is all that is necessary to gain movement. Remember that when bison go down in the chute, releasing the side squeeze is all that is often required. Also, if possible, it is helpful to evaluate the circumstances that caused the need for the stock prod so that they can be avoided in the future.

The best advice I can give is to all bison farmers of ranchers is to help other producers when they handle their bison. There is always something to be learned or shared. We often see producers with experience helping others. Having an experienced crew goes a long to problems. I find at times it is necessary to work bison slowly while there will be other occasions you will need to work quickly when a gate or slider needs to be closed or open.

Sorting and breaking of the herd into smaller groups can be done patiently by baiting with feed. Time spent here with the person and tractor or feed truck that they are familiar with will save time later as small groups do not create the “bunching” problems of larger herds. Large groups in enclosed areas with distinct tight corners are areas where most of the goring and trampling injuries can occur. The big bulls and older cantankerous cows are the cause of a majority of these injuries.

Before you design and build your handling facility, evaluate facilities of other producers. You can learn much from the experience of others. Design your handling area so that most barriers are solid and that there are no places where the bison can get a long run. Neck injuries are often the result of fast running bison crashing headlong into solid barriers. Again most producers only open the head chute when bison are in the chute to prevent running headlong into the crash gate. Some crash gates are spring loaded and padded to minimize injuries.

The farmers and ranchers in the bison industry have made significant progress in improving their bison handling skills. Major injuries are rare and minor injuries such as horn damage or bloody noses are becoming uncommon. Monitor bison injuries when you handle your bison. Each time you handle bison, try and improve the outcome from the time before. There are times when patience is a virtue.